This year marks 100 years since the end of the Great War. The conflict, which many expected to be over in months, went on for four years from 1914-18 and caused devastating injuries and deaths on all sides. Nine million British soldiers fought in the war and 700,000 were killed while 2 million were injured. Ironically, the sheer scale of the numbers can make it hard to appreciate that each casualty was an individual with a life and a family – all of whom were affected by the slaughter. The war was waged by countries, but it was fought by individuals.

Dulwich College in south London has found a way to tell those individual stories, bringing home the human cost of the conflict to boys studying at the same school 100 years later. More than 3,500 former pupils (known as OAs) fought in the Great War. A new website focuses on the 534 alumni known to have died in the war or in the immediate aftermath. It’s a powerful memorial.

An OA’s profile containing a biography, maps, artefacts and more

The College has a remarkable archive containing letters from the families of alumni and this was the project’s starting point. Dr Nick Black, Head of Middle School, said: “We have taught the First World War for many years and I always felt that it is dominated by big statistics, especially around casualties. About 15 years ago we started to use our archive to make the war individual. The war is about social history as much as anything else and the boys were able to capture something of each family story. Where did they live? What did they do? Does the house still survive?

“As technology changed, we were able to collate more information alongside name, rank and regiment.  We digitised photographs and letters, and included GPS coordinates of the soldiers’ homes, as well as their graves. We had a basic spreadsheet by 2014 but we have added much more in the intervening 3 ½ years. We used the old fees ledgers to work out where the boys had lived when they were at school, and this allowed us, with much detailed work, to identify individual addresses. The Commonwealth War Graves Commission provided details of where each OA was buried or commemorated. We then worked out the GPS coordinates for both locations for each OA and mapped them. We also cross-referred to other websites, so if an OA went to university or another school, and they mention him, then we added that link. ”

Earlier this year, Dr Black put the website project out the tender, searching for a design company that had the creativity and technical expertise to create a website that pulled all the information into one cohesive – and fascinating – whole. He chose Pad Creative.

Peter Jacobs, Pad’s Director of Online Services led the design and build of the website. He said: “Nick and his team had gathered a formidable amount of information. We could see straight away that they needed a comprehensive search engine so that all that data could be easily accessed. We developed an advanced search that allows users to find OAs by a range of criteria such as dates (birth/death/years at the school etc), military rank or keywords. In addition, we included OA profiles showing a detailed biography as well as key artefacts such as letters and photographs as well as other documents from the time.

“One of the components of the build which has proved very popular, especially among local people, is the way we have accurately positioned a 1906 Dulwich estate map overlaid on the home address map. It has helped people picture what the area was like at the time. 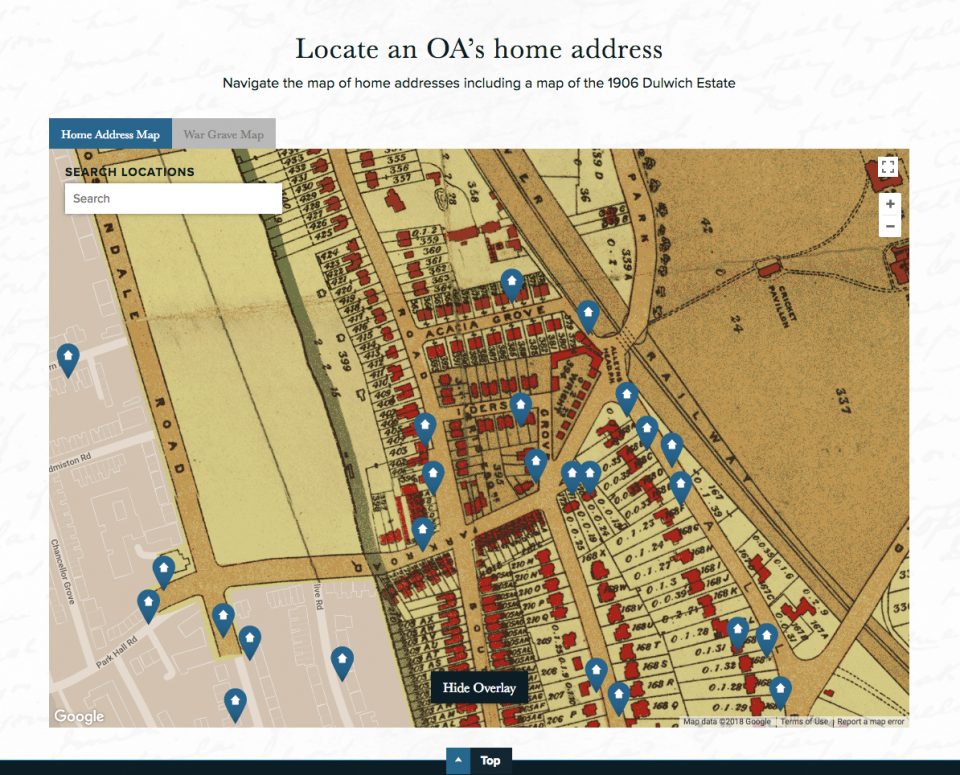 A zoomable and pannable map of the Dulwich Estate, from 1906, was overlaid onto Google Maps so users could see an OA’s home address in a historical context.

“Being able to portray information in the database in the form of graphs and charts has also brought the information to life. For example, we can illustrate trends such as OA age at death and we’ve introduced a timeline of events which visually displays when the OAs died, alongside key battles and events. The site was built using WordPress content management system, providing a very user-friendly interface for the team at Dulwich College to keep the database updated.”

Nick said: “The Pad team understood what we wanted, they were highly creative and brought the design to the history we had. The fact that they weren’t historians was an advantage because they looked at all the material afresh and artistically. They were highly professional at every stage; we could not have asked for more.”

Feedback – 6 of the best

The website is a fascinating resource, not just for the College’s pupils, past and present, but also for people living in the area, and many people have written to Dr Black to congratulate the College:

Learn more about our Website Design and Build service.